“Bordeaux gets a bad rap. When I told the French people I knew in New York I was moving to Bordeaux, I got the same reaction, ‘Bordeaux est jolie, mais fermée. Tres fermée.’ I’m not sure how it used to be, but after living here for three years, I couldn’t find anything further from the truth,” Melissa Rindell, Artistic Director of Le Projet Téléphone, said.

If Bordeaux had a reputation for being closed before, times are changing, as artists like Rindell and the other participants of Le Projet Téléphone will argue. Le Projet Téléphone is a cross-genre artistic game of telephone, involving artists from 9 different countries working in ten different disciplines. The first artist picked a proverb from a hat as a point of inspiration, and had two weeks to create something before passing the work along. Each artist only saw the work of the artist before them and the line-up includes: a writer/actor – Rindell, flamenco dancer – Deborah Dawson, DJ Jowen, illustrator – Ita Duclair, songwriter – I AM STAMGRAM, costume designer – Helina Raak, theater company – Collectif OS’O, filmmaker – Fred Cavender, painter – Kelly Allison and mixologist – Timothé Seguin-Medrinal. Their work will be presented in a cohesive performance at Les Vivres de l’Art on April 29th at 9pm.

“When I saw Electric Pear Productions do ‘Synesthesia’ (The show Le Projet Téléphone is based on) in New York I was blown away. As an audience member, you’re dropped into the middle of the artistic process and it’s impossible not to engage. You find yourself looking for meaning, finding ideas, evaluating what’s being expressed, thinking how you would have done it differently and having a vested amount of interest in what comes next. I talked to Ashlin Halfnight, the originator of the concept and got the green light. This show has been done in New York and LA, but this will be its European premiere and I can’t think of a better place to launch it than Bordeaux.”

“Projects like this are a blast in Bordeaux,” Le Projet Téléphone’s filmmaker, Fred Cavender, of Tuperhero said. “It’s a big town, so you have access to a lot of things, but not so big that the business side would take over. People are nice, and open to things like this, which makes it easier to ask for help, favors and support.”

Cavender, isn’t a newcomer to the Bordeaux scene, he has spent the last 28 years of his 33 years in France, but found himself reaching out the expat community after deciding to make a short film in English every month in 2017. Tuperhero’s films were screened monthly at the HMS Victory and garnered praise from the UK Film Review.

“After the twelfth film at the end of the year, we were out having drinks and at one point I looked around and realized that I didn’t know any of the people I was with a year ago and it wasn’t weird, it wasn’t uncomfortable. It was cool. They were all friends.”

On his experience on Le Projet Téléphone, Cavender said,  “That was a bit weird because they (French Theater Company Collectif OS’O) had gotten together to do a theater piece for me. So I was alone watching this theater piece. It was a bit overwhelming in the sense that I felt a lot of pressure to understand as much as I could, so I could then write a film, but at the same time I was thinking, ‘Oh! Wow, it’s funny being in the garden watching this theater piece just for me. Oh! I wonder how they came up with this,’ so there were lots of things going on, but it was fun. I thought the theater piece was really good, almost too good so I have a bit of pressure to live up to it.”

Cavender’s experience was unusual in Le Projet Téléphone, most of the other artists have done their exchanges publicly, highlighting iconic Bordeaux locations like Le Jardin Public, Place de la Bourse, Place de la Comédie, La Chappelle du CROUS Bordeaux, Plage l’Horizon at Cap Ferret, Musette, and Frida,  as part of a documentary being made about the project by Azerbaijani filmmaker, Emil Karimov.

“My favorite location was probably the beach (Plage l’Horizon at Cap Ferret). It was cold and pretty challenging, but it was a nice sunny day and the whole thing with costume and setting was pretty otherworldly,” Karimov said of filming Estonian Designer, Helina Raak, wearing her costume and doing a cat walk on an abandoned, graffiti-covered bunker in February.

4 months earlier, after performing a flamenco dance for the DJ following her, Deborah Dawson stood in front of Le Grand Theatre, and looked around at the field trip of kids who had temporarily forgotten their treasure hunt and gathered around. When asked if she thought Bordeaux’s reputation for being closed was merited. Dawson, a Canadian, who was recently awarded a residency at Le Cuvier in Artigues-près-Bordeaux, to develop a flamenco show exploring her Indian roots, smiled and shook her head, ‘no.’

“Bordeaux is buzzing. There’s an influx of expats and French artists from other parts of the country that are coming to live here. It’s incredible, the depth of art this city has, and the amount of support it’s getting, especially from places like Le Cuvier, La Grande Poste and Les Vivres.”

“ I love Les Vivres de l’Art,” Rindell said. “ It reminds me of Salvador Dahli’s house in Portlligat. It’s not just a place, it’s an entire world. The imagination of Jean-Francois Buisson is present in every detail and what a gift, to have a place like that open to the public. I saw a show there, emailed Jean-Francois about Le Projet Téléphone and he offered me a spot in his event, ‘Les Vivres de l’Art avec 5 sens.’ To get a spot at a venue like this would have taken years and a considerable amount of money in New York. Les Vivres de l’Art truly is, ‘Le Domaine du Possible.’”

Le Projet Téléphone will be perform as part of “Vivre de l’Art Avec 5 Sens” on Sunday, April 29th at 9pm, admission is free on a limited first-come basis, arrive early to guarantee admission. 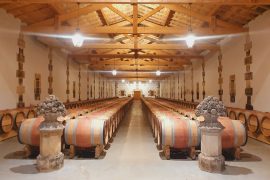 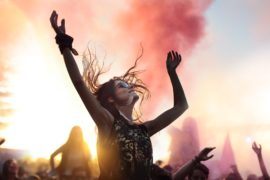 The best music festivals in Bordeaux 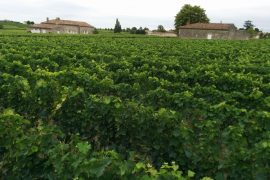