How do you usually discover a new city? Many tourists prepare themselves before visiting a new location, they read a bit on Wikipedia, some leading blogs or at least “the best places to visit in X” on Trip Advisor. Then, when they actually arrive at the city and take a regular tour, they feel as if they are already familiar with some of the stories.

I believe that taking a tour by foot, by bike, on a boat, or on a horse (if that’s your thing), is very important as the pretty sites you see all over the city receive a deeper meaning and you discover details and the history behind them. However, the traditional tours usually show only the most prominent stories about a city. Wouldn’t you like to also hear some original tales that are not necessarily available on the internet?  That is exactly what I felt I needed when I joined the “Free Ghost Tour” this last weekend.

So what is so special about that tour, you ask? Well, the main feature is you will hear stories you probably never heard before on traditional guided tours. The main objective is to tell you some scary stories, some of which have happened in the past and others that are considered part of Bordeaux’s myth. For example, did you ever hear about the werewolf of Bordeaux? Do you know what was found under Fléche Saint Michel during the French revolution? Do you know what was the venue of the Frog and Rosbif Pub used for in the past (think about it next time you have a drink there 🙂 )? The tour is not very long, it takes about an hour and a half in which you get to see a small part of Bordeaux (some parts of quartiers saint Michel and the Grosse Cloche) but Hubert, the guide and creator of the tour, has a story to tell about almost every little street you pass by.

Hubert, the founder of HUBordeaux, proposes several different tours, some in English and some in French. Previously, Hubert worked as a journalist so he’s no stranger to storytelling and he does it well by finding interesting stories and by attracting the audience to participate with questions and funny anecdotes. As someone who studied history at the university, he’s very knowledgeable, not only about Bordeaux but about the history of France in general.

After living abroad for several years, Hubert decided to come back to his native city, Bordeaux. “I just love Bordeaux and want to tell stories about it” he tells me when I ask him why he decided to open his company. Hubert’s company has two types of free tours in English: the general Bordeaux tour, where you will see all the important monuments and learn the most essential details of the city’s history, such as the slave trade, the water mirror and many more; and the ghost tour, which gives an extra spicy view of the city with stories from different eras and another perspective on Bordeaux’s society. For the ghost tour, the company offers simultaneous Spanish translation as well. The tour is free and Hubert says he hopes people will enjoy his tours enough to leave a tip, and it looks like they sure do.

You can find all the information about the upcoming tours and the dates on his site or on his facebook page.  So if you are ready to discover a spooky side of Bordolaise history follow the green umbrella 🙂

Do you have other great tours to recommend? Please share them in the comments below! 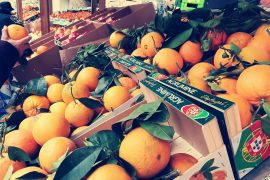 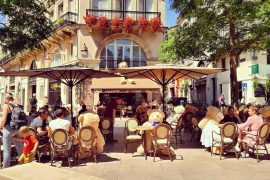 What to do in Bordeaux this Summer