The Croissant, Saint Honoré and Éclair are familiar names when it comes to French patisserie and desserts. But did you ever hear of canelé or puits d’amour? It’s time for you to meet the local sweet specialties of Bordeaux. Bordeaux harbors a unique pastry scene with delicacies that can’t be found anywhere else in France. So if you’re a foodie like me you wouldn’t want to miss it when visiting the region. In this article, I’m going to tell you about the best local desserts, pastries and chocolates you can find in Bordeaux and where to buy them. If you want me to personally take you to my favorite places in Bordeaux (sweets and others) you should check out my food tours :). Now let’s go and discover the sweet world of Bordeaux :).

We cannot talk about Bordeaux’s specialties without mentioning the most famous local dessert, the Canelé. The little brown striated pastry became one of Bordeaux’s symbols and can be found in many sizes all over the city. Like many other things in Bordeaux, the story of Canelé is related to the wine world. Legend has it that the first canelés were made by nuns at the Couvert de L’Annociade de Bordeaux at the end of the 17th century. The original canelé didn’t have the sweet flavor it has today and was made out of flours and egg yolks that were given to nuns by winemakers who used egg whites to purify the wine. It wasn’t until the 20th century that Canelés reappeared as a dessert when an unknown pastry chef decided to upgrade the recipe with rhum and vanilla. Traditionally the canelé’s mold was waxed with bee’s wax to make the pastry crispy from the outside and soft from the inside. Today, however, many use butter instead. You can usually find them in three different sizes and in some places they are even filled with different sweet or savory flavors. In Bordeaux, you have many places specialized in Canelé and almost every bakery will offer them. While the biggest and most famous canelé producer is Baillardan, I think the best one is offered by La toque cuivrée. You can find two of their boutiques on rue Sainte Catherine and many others in different districts of Bordeaux.

Le Puit d’amour, or “well of love” in English, is a local little pastry that you can’t find anywhere outside the Bordeaux region. The pastry was created in 1952 by Maison Seguin in a little town South of Bordeaux called Captieux. It is made out of pâte à choux (light pastry dough) topped with crème Chiboust (a mix of crème pâtissière and an Italian meringue). You can enjoy the perfect bite-size pastry at the Capucins market or in Maison Seguin in the Cauderan district (address: 160 Avenue Charles de Gaulle, 33200 Bordeaux).

discover more places to eat at the market check out my article about the Marche des Capucins.

One of Bordeaux’s most popular pastries actually comes from Cap Ferret. The delicious dunes blanches were created in 2008 by the pastry chef Pascal Lucas, or should I say by his son. One night, 12 years ago the young man came back home from a party very early in the morning and was really hungry. Knowing that by that time his dad would already be at the bakery he headed there to find something sweet to satisfy his appetite. At the bakery, he found a chouquette (Choux pastry sprinkled with pearl sugar) and a cream his father had prepared for another dessert and simply mixed the two. The result became an immediate success and Pascal opened dedicated shops for the dunes blanches in Arcachon, Bordeaux and now even Paris. In the center of Bordeaux, you can find them at 7 Rue de la Vieille Tour, 33000 Bordeaux

The macarons of Saint Emilion

If you ever visited Paris you probably tasted the famous macaroons of Ladauree or the fancy ones of Pierre Herme. But did you know that the original macaron actually comes from Saint Emilion? The macaroons of Saint Emilion are produced since 1620 when the Ursulines sisters established their convent in Saint Emilion. The recipe is being passed from generation to generation and hasn’t been changed ever since. As opposed to the colorful two-cookies macarons you can find in the rest of France these have only one cookie that is made from almonds, egg whites and sugar. After wine, it’s the second most famous produce of Saint Emilion. You can find them at the little “Fabruque de macarons” shop in the center of Saint Emilion. Address: 9 rue Guadet, 33330 Saint-Emilion, France

This yummy triangle pastry is rare to find anywhere outside of the Bordeaux region. It’s a puff pastry (just like mille-feuille) stuffed with frangipane cream and shaved almonds on top. Some chefs add a bit of creme patissiere to it, in order to lighten the heavy frangipane texture. The strange name comes from its shape. Originally the jésuites were covered with pralines or chocolate icing which created a look of a hat with raised edges, just like those of the Jésuites. The original Jésuites are a catholic order of the Catholic Church founded by Saint Ignatius of Loyola from the Spanish Pyrenees. When in Bordeaux, don’t waste your calories on a simple croissant, instead try the local Jesuit in one of the bakeries in the city. I buy my Jesuits at the bakery in Saint Michel.
Address: 51 Rue des Faures, 33000 Bordeaux

When you stroll the streets of Triangle d’Or, the fancy district of Bordeaux you will come across a handful of chocolate shops. However, there’s only one chocolate that’s truly identified with Bordeaux and it’s called les guinettes. The guinette is a cherry macerated in alcohol and then encased in dark chocolate. In Bordeaux you can find them in two tastes, Kirsh which is a cherry liqueur or in Armagnac which is an excellent local Brandy from the South West of France.

Bouchon de Bordeaux is a traditional dessert, much less known than others on this list. It was created in 1965 by the patissier- chocolatier Jacque Ponquet who wanted to create a pastry that would highlight the wine specialty of the region. In 1976, a discovery of almond trees in Saint Emilion inspired him to use almonds with raisins to create an alcoholic dessert. The dessert is created in his factory in Bruges and sold in several shops in Bordeaux specializing in products of the Southwest.

Is it your first time in Bordeaux? If it is you should definitely check out my ultimate guide to Bordeaux to get familiar with all the must-see places in Bordeaux. To help you choose a hotel in Bordeaux I’ve gathered a list of the best hotels in the center of Bordeaux as well as a guide to the districts of Bordeaux to help you find your preferred AirBnB location.

Lost in Bordeaux helps you enjoy the city and region in many ways so be sure to follow us on facebook/Instagram for more daily updates on things to do and see. Or better yet, join my newsletter where I share a lot of exclusive info about Bordeaux and the region – sign up here. 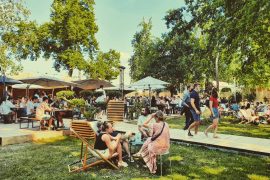 The best Summer bars in Bordeaux 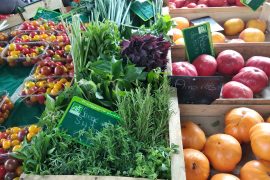 The best markets in Bordeaux 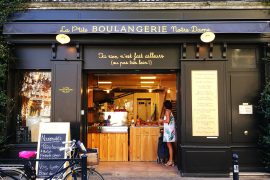 The best foodie streets in Bordeaux