You don’t need to rent a car or travel far from Bordeaux to have a fun and enriching day trip. Some of this region’s treasures can be found in Pessac, one of Bordeaux’s biggest suburbs. Just jump on a tram or your bike and enjoy a full day of history, nature, wine, and street art in a beautiful historic town. The trip I planned is best done by bike but you can also do it by foot, car, or public transport.

Here are all the places I’m going to discuss in this article:

The center of Pessac

Eat and Coffee – If you want to start your day with coffee or a light lunch, head to the chic coffee shop Eat and Coffee at 14 Place de la Liberté.

Fromagerie Dauchez – on the main street (30 Avenue Pasteur) you can also find a fantastic cheese shop.

Every Tuesday and Saturday there’s a very nice market in the center of Pessac. Try to plan your trip on one of these days as the center tends to be livelier on market days.

Le marché Bourrec – the biggest outdoor market of Pessac takes place every Sunday on Avenue Pierre Wiehn. This is one of the biggest markets in Bordeaux metropole with more than 170 stalls selling the best products the region has to offer.

Street art in the center of Pessac

Pessac is one of the main street art centers in Bordeaux metropole and even has an annual festival, called Vibrations Urbaines, dedicated to street art. You can find dozens of murals all over town with some located close to the center of Pessac.

My favorite one is located near the train station in Pessac, at 25 Place de la 5ème République. The huge mural of an elderly man called Entre Deux Mondes was created by the French duo Sismikazot in 2017. On the map I’ve made for this article, you can find several other murals in the center of Pessac, marked with a yellow painter’s palette sign.

If you’re a street art geek, you can find many more murals all over Pessac on this site.

Another one of Pessac’s hidden gems is the beautiful villas in quartier Casino, on rue Goya and Rue Alexandre Jaubert. Between 1897 and 1904, a local architect named Hector Loubatie built 17 villas that were inspired by the villas of Ville d’Hiver (the winter town) in Arcachon. Today the neighborhood looks like mini Arcachon and the houses carry the nickname “arcachonnaises”. During the Belle Epoque, these villas were the resort houses of wealthy Bordeaux residents.

Get on your bike and discover Pessac

From the elegant center of Pessac, you can start your cycling tour to discover some of the main attractions of this town, from wine to nature and fascinating architecture. I remind you that this tour is doable by car or public transport and even on foot if you’re in good shape. However, I strongly recommend exploring Pessac by bike.

This colorful residential neighborhood can be easily overlooked, but it’s actually one of the most important monuments of Pessac. The Cité Frugès is the first housing project of the famous Swiss-French architect, Charles-Édouard Jeanneret, known as Le Corbusier.

The project was initiated by Henry Frugès, a wealthy industrialist in order to house working-class families in the 20s. In this project, Corbusier experimented with many new architectural ideas, incorporating strict geometric shapes, panoramic terraces, and vibrant colors in his design.

Cité Frugès was listed as a UNESCO heritage site in 2016.

One of the houses in the district is a museum where you can learn more about the project and visit the house interior with all of the original features. See all the details about the visits on this site. The address is 4 Rue le Corbusier, 33600 Pessac.

The vineyards of Château Pape Clément were planted at the request of the Archbishop of Bordeaux, the future Pope Clement V. The château itself was built much later and has beautiful Neo-Gothic embellishments. Today apart from producing wine it’s also one of the most beautiful luxury hotels in Bordeaux. The chateau offers daily visits in both French and English as well as winemaking workshops where you can assemble your own wine.

It’s time for some nature! The cyclers or hikers among you will love this part of the trip. From Château Pape Clément take avenue du Pont de l’Orient north until you get to rue Surcouf (it will be to your left), a green pleasant path that follows the Peugeu stream.

The Peugeu is quite a long river that centuries ago was running through the center of Bordeaux flowing into the Garonne river (around Cours Alsace Lorraine). Since then the part running through the city center was covered leaving it exposed to the open air only in the suburbs. On this trip, We’ll be following the stream in the southwest direction.

On the way (around the intersection with Avenue de Noes) you’ll pass by Moulin de Noes, an 18th-century watermill. This is a very picturesque spot for a picnic.

From the Moulin de Noes, we’ll be heading to our last destination, the Bourgaill forest. To do that you’ll have to cross the highway through Passerelle Rocade (find the path from rue Ciceron). On the other side continue on Rue des Frênes until it meets Avenue de Monbalo, then take the cycling path on your right until you reach the eco-park of Bourgailh.

The Ecosite of Bourgailh is not just a park, it’s a universe of plants put together in great landscape design. The area of the Forêt du Bourgailh includes a 2.6 km walking trail, the largest tropical greenhouse in the region, sports facilities, a skate park, an amphitheater, a zoo, and a beautiful animal-themed playground. This is one of the most kids-friendly places in the metropole and on weekends it’s filled with families cycling and hiking.

There are also plenty of nice ecological and educational events taking place there throughout the year, such as mushroom hunting, a pumpkin festival, planting workshops, and more.

Discover more parks in my article about the most beautiful parks in Bordeaux.

How to get to Pessac from Bordeaux

Pessac is actually one of the easiest day trips on my site. It’s located about 10 minutes drive from Bordeaux center and is very accessible by public transport. You can take tram B from the center of Bordeaux bringing you to the Pessac Centre tram station. You can also get there by train from Gare Saint-Jean and by several buses from different parts of Bordeaux.

However, as I already mentioned the best way to do this day trip is by bike! If you don’t have your own bike you can use one of the city bikes of Bordeaux métropole – some of the stations are located in Pessac center so you can start and finish your day there. See all the bike stations in the center of Pessac in this link.

If you want to discover more of Bordeaux by bike, read my article about the Bridge to Bridge bike trail in the center of Bordeaux.

If you’re looking for more ideas for day trips in the Bordeaux region here are a few other articles you might want to read:
The best beaches around Bordeaux
Day trips around Bordeaux – wine, beaches and villages
10 day trips from Bordeaux by Public transport
A weekend in Medoc – Bordeaux wine tours
What to do and eat in Saint Emilion 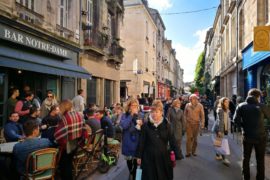 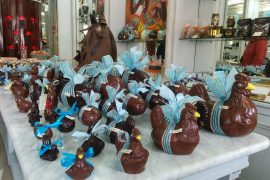 The Best Chocolate Shops in Bordeaux