I absolutely love street art and any city that makes the effort to complement its historic landscape with a modern expression of art is buying a fast ticket to my “go-to” list. That’s why Angoulême, which is located in the Charente department, about 1.5 hours drive from Bordeaux (or 35 minutes by train) has been on my mind for quite a while now. Angoulême is widely known as the comics and street art capital of France and is globally renowned for its Internation Comics festival hosting more than 200,000 people every year. Although I knew that I’m expected to see some beautiful murals in Angoulême, the creativity of this city took me by surprise the minute I entered the historic part of the city. Angoulême’s admiration for comics was expressed in every detail, from colorful post boxes to painted recycling bins and statues of famous comics characters. Visiting Angoulême is a little bit like playing treasure hunt for art lovers, there’s something to find on every street corner.

Now, don’t get me wrong here, this is by far not the only reason to visit Angoulême. It’s a beautiful historic city, surrounded by ancient ramparts, abundant with elegant monuments, and generally a vivid place with an impressive number of bars and restaurants. My article about all the things you can do in Angouleme is in the making but in this article, I want to focus on what attracted me to this city, which is its street art. My goal is to make you experience this city as if we were in an open museum of comics and street art. Having said that, if you really love comics don’t miss la Cité Internationale de la Bande Dessinée et de l’Image, the comics museums of Angoulême.

If it’s your first visit in this region, check out my guide to Bordeaux and my article about visiting Cognac. You can also get plenty of traveling tips in my Facebook group “Travel in the Southwest of France“.

The map of all my favorite murals and statues

There are 25 huge murals painted on different buildings spread around Angoulême. If you can, pass by the tourist office (located in the Hotel de Ville), and grab a map indicating all of these murals. However, you should know that some of them are located quite far from the city center and require a long walk to get there. So if you are limited in time or just want to save your energy for the more interesting parts of the city, I made a map of my favorite murals and other street art that I really loved when strolling the city. In most of the locations on the map, I added the name of the work and the artist’s name and in some, I also added a photo and a link for more info about this work (in French).

I should mention also that there’s an app that can help you navigate around the murals in the city. I didn’t try it myself, but if you want to give it a try, these are the links, Google Play, App Store.

My three favorite murals in Angoulême

I should start by saying that all the murals in Angouleme are stunning but there are several that I particularly loved and I think you should see.

This one is probably the most famous mural in Angouleme and one of the best spots for taking photos and selfies in the city 🙂
In this Mural, Max Cabann imitates the atmosphere of the old city with its ramparts and old buildings. It almost feels like a continuation of the street your standing on. You can find it just next to the market on 6 Boulevard Pasteur.

This beautiful mural is located in a residential neighborhood slightly outside of the city center, but it’s so stunning it’s worth the walk. François Boucq is a French comics artist known for its books about Jérôme Moucherot, an insurance salesman, who is dressed in a leopard suit. The mural can be found at: Rue du Dr Duroselle above the parking entrance.

L’Archiviste by François Schuiten is one of the most special artworks on the streets of Angoulême – one million holes on a stainless steel plate over a huge building facade. The building is located on 24 Avenue Gambetta.

If you can choose when to visit Angouleme, the best time would be in January when the city hosts its famous Comics Festival. The Angoulême International Comics Festival is the third biggest comics festival in the world, hosting more than 200,000 visitors every year.

The murals of Angoulême display the works of the most famous comics artists in France. However, street art and comics are such an important part of the modern identity of this city that the murals are only a fraction of the art you can find in Angoulême. I spent hours just walking and absorbing the colors, the cute characters painted on the shatters, and unusual statues in the garden below the ramparts. Here are some of my favorite discoveries from this beautiful city. I count on you to find many more when you visit fascinating Angoulême 🙂 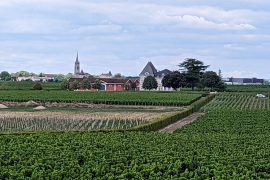 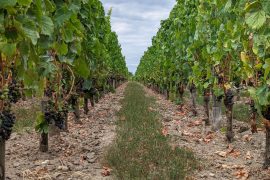 How to visit wineries in Bordeaux without a car 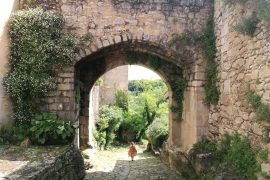